Although environmental, social, and governance issues aren’t simple, Brian Moynihan advised CFOs in a recent Fortune event to approach ESG metrics in a way that is straightforward, calculable, and deliverable.

Companies across the globe are increasingly focused on their environmental, social, and governance (ESG) practices. There are inherent benefits in taking a proactive approach toward identifying, quantifying, and addressing ESG practices to build a future-ready and responsive organization, according to Brian Moynihan, CEO, Bank of America.

In a recent Fortune CFO Collaborative conference that examined the future role of finance leaders, Moynihan characterized ESG practices as potentially beneficial to a wide range of stakeholders beyond a company alone.

When it comes to Bank of America’s approach to ESG, “We believe in the genius of the 'and'—that you can deliver profits for your shareholders and deliver for society,” he said.

Yet the considerations aren’t purely altruistic for companies. Bank of America research has shown a correlation between how businesses approach ESG issues and their overall performance, Moynihan said.

“Investors are now trying to substantiate how they are investing consistent with ESG principles because the people who give them the money want them to do that.” 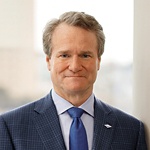 He also discussed ESG metrics, which assess a company’s exposure to a wide range of environmental, social, and governance risks. “Investors are starting to look harder and harder at these metrics.”

The evolving demands of investors are well known to CFOs, he added. And as the attention on ESG metrics grows, organizations would do well to take the lead and employ measurable, accepted standards instead of waiting for third parties to rank their performance without seeking their input. ”Suddenly you get a rating, and you'd look at and say, ‘I don't recognize the company they're talking about,’” Moynihan said.

ESG metrics, Moynihan added, are quickly becoming competitive factors for both business-to-business (B2B) and business-to-consumer (B2C) organizations, as their customers are increasingly concerned about such practices.

“[Customers] are going to want to know how you’re going to get to net zero [risk], or else they’re going to buy the product from someone else, and that’s going to force activity fast,” Moynihan said.

To help guide companies, the World Economic Forum and its International Business Council (IBC), which Moynihan chairs, sought to establish clear ESG guidelines. In collaboration with Bank of America, Deloitte, EY, KPMG, and PwC, the group curated a set of 21 core and 34 expanded metrics that include non-financial disclosures around four pillars: people, planet, prosperity, and principles of governance.

“We built them off the architecture that we thought was comfortable for companies ... which is real metrics that you can really calculate, that are material by definition, and then can be measured over time,” Moynihan said.

Acknowledging that the underlying issues aren’t simple, Moynihan suggested that organizations approach the metrics in a way that is straightforward, calculable, and deliverable.

Sustainability metrics are already being discussed by such bodies as the U.S. Securities and Exchange Commission and the International Financial Reporting Standards Foundation, Moynihan noted. Yet even though regulators don’t yet require the reporting of ESG metrics—which Moynihan expects will eventually happen—the pressure is already growing among enterprises.

“It'll self-police itself, even if it doesn't become part of the fiscal metrics,” he said.  ”Investors are now trying to substantiate how they are investing consistent with ESG principles because the people who give them the money want them to do that.”

Moynihan’s advice to CFOs on ESG was clear: “If you say you do this on the environment, and it's not in metrics that are understood and agreed to by other people, you're going to be spending a lot of time saying, ‘You know, that is not right. It's not calculable. It's greenwashing.’”

Minding the ‘Mirrors and Windows’

Asked about his approach to diversity, equity, and inclusion as an organizational priority, Moynihan alluded to the concept of “the mirror,” which reflects internal values, and “the window,” which offers insight into the experiences of others.

“First, it’s the CEO having representation, top to bottom, that matches, and that's how you pay everybody for equal pay for equal performance,” he said. “I think this is going to be a required disclosure for everybody.”

Moynihan added that the size, scale, and pay capacity of large corporations make them “companies of opportunity” that create an economic ripple effect. “If we get our earned income from our companies, it will create middle-class, above middle-class people … and, so, if we have good diversity, that means society moves together.”

Moynihan added that Bank of America had invested in scores of such firms. “And that then creates entrepreneurial capital, both to the private-equity sponsors and to the companies,” he said. “Everything starts with how you run your company and then turns to how you exercise.”

How Companies Are Meeting ESG Challenges

Later in the event, Robert J. Jackson Jr., director, Program on Corporate Law and Policy at the New York University School of Law, said that many corporate leaders are seeking outside expertise on ESG issues—especially as they grow in importance to stakeholders.

“If you’re an organization of significant scope, you’re on a global scale, and you need to understand your supply chain situation and the labor issues on the other side of the world, you might very well need a professional who’s tasked with managing these issues full time,” he said.

Emma Stewart, sustainability officer, Netflix, said the company is watching such events as failures of local power grids that affect customers directly—as well as technology, regulatory, and policy risks alongside varying ESG metrics and disclosure requirements. “We are also quantifying things like the number of times wildfires have interfered with production,” she added. “That is our core business, making television and film. And unfortunately, that number is going up every year and in every region.”

As a result, Netflix is making climate change “our most important ESG focus area” and set an organizational target of net-zero emissions by next year, Stewart added.

Claus Aagaard, CFO, Mars Inc., noted that 90% of the family-owned company’s climate footprint “sits inside our factories or our direct supply chain,” making the environment a primary focus over the past several years.

Aagaard said the company recently launched an initiative with PepsiCo and McCormick & Co. to help bring its suppliers up to speed with sustainable practices after talking with its top 200 suppliers and finding that “only 10% of them actually have science-based targets—and we have no hope of achieving our commitments with extensive Scope 3 reductions, which is really our focus, without them playing along.”

Learn more about Fortune’s CFO Collaborative events and gain insights from some of the world’s top business leaders, including former CFOs-turned-CEOs, about the evolving CFO role.

Join us on Oct. 28, 2021, for the Fortune Emerging CFO virtual event to discuss planning for volatility and best practices for finance leaders to mitigate risk, including the increasing concerns around inflation and labor pressures.

In this Fortune CFO Collaborative, hear how Netflix, Bank of America, and NYU navigate ESG benefits and pressures.