In the midst of the COVID 19 pandemic, Formula 1 (F1) orchestrated races across several global venues. It was a mammoth task that required finding the right technology and logistical solutions. We caught up with Chris Roberts, head of IT infrastructure at Formula 1, to learn more about the organisation’s digital journey on and off the track.

Can we start by getting a bit of background on you and how the IT function at F1 has developed?

I joined Formula 1 back in 1999, and it was one of those jobs you come into and think, “Right. I'll come here and I'll do a few years,” but then you join and get a little bit hooked. At F1, change is just part of the engine, and there’s constant evolution here. I talk to my peers in similar organisations, and there's a lot of keeping the lights on. It’s quite different at Formula 1. It’s very much an innovation machine and a real change animal, which has kept me busy.

Alongside the challenges of the COVID-19 pandemic, you had 17 races in 11 locations, including five new venues, to deal with. From a tech perspective, how do you start to think about that?

From my perspective, if I put on a purely IT hat, COVID-19 was a time where we absolutely pulled it all together. Everybody across the company did massive, massive amounts of work. But we used COVID-19 as an opportunity to accelerate what was a three-year plan, and we squashed it into about eight weeks. We took our full broadcast infrastructure, and we cut about 80% of it off and decided to keep it all in our technical facility in Biggin Hill.

“The key learning for me was to get ahead of the game and be as flexible as humanly possible because user requirements were many and varied.” 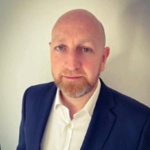 We do the acquisition part of the racing at the circuit, and then the production piece is done back in the UK now. I guess it was about eight weeks of work, which should have taken about three years to design. COVID-19 gave us the opportunity to take that risk, and actually, it was a springboard where we thought, “We need to do something. Let's just ramp up.” The plan was already in the back pocket, so we kind of knew what we wanted to do. We just really accelerated that.

We're talking about massive infrastructure changes with regards to separating something that had been glued together for the last 20 years, pulling that apart and actually separating it from different continents. Without the connectivity piece, we are absolutely dead in the water, so we put a lot of work and a lot of effort into getting the fastest network that we can with the lowest possible latency.

F1 and innovation have gone hand-in-hand throughout the history of the sport, but which technologies are you prioritising as you look to keep up with digital innovation?

Off the track, it’s all about customer focus, so customer data platforms are very high on my list, and they're certainly on the radar. We're looking at a number of programmes right now as we review our whole martech stack. We want to be able to give Formula 1 fans the content they want and as much of it as they want to consume.

Without being too intrusive, we'd like to understand who our customers are better so that we can service them better. It's a big area for us at the minute to ensure that what we're putting out there is the right content that people are searching for and looking for. I would say that's probably the biggest priority at the minute, and it is all around our martech stack.

Protecting intellectual property is obviously a big priority in F1, but from a corporate perspective, can you tell us about some of the cybersecurity initiatives you’ve been working on?

When Liberty took over Formula 1, they came in with a very strong agenda. Bernie [Ecclestone] did a really good job at making handshakes and deals. However, Liberty's view was, “We haven't got a marketing department. We need a commercial department. We need all these elements that you would consider natural in many businesses.” So they set about spinning up all these new departments.

These groups went away and started working on all of these projects. People think of Formula 1 as a massive global brand, but actually, we're 500 people. And sometimes people assume there are thousands of us, but we have to utilise a lot of third parties and partners to achieve what we want to achieve. So the cyber or the information security programme was spun up to put a bit of a net around some of these third parties to help us work with those that we entrust with some of our corporate data and things like that.

“We want to be able to give Formula 1 fans the content they want and as much of it as they want to consume.”

People and awareness are always at the core of cybersecurity, particularly during COVID-19, where people have been working from home. They might get a little sloppy, use a personal device, or do something that isn’t quite in line with security requirements. We’ve certainly done a lot over the last 12 months to ensure the security of the data and making sure we know the value of that data.

Given the focus on ESG (environmental, society, and governance) right now, I know your Race to Zero initiative has been working toward reducing F1’s carbon footprint. Can you tell us about that?

Cloud has certainly had a big impact on the way we work. The ability to spin up and actually shut down services much faster, where we don't have to make a capital investment on hardware that's just going to sit there whirring away, has been quite a big game-changer. Our motorsport team have been doing a massive project which utilises the cloud. That would have required a whole comms room in itself if we decided to build out that infrastructure internally. But we can spin it up, they can do the work on it, and if they've finished, we can turn it off, saving us who knows how much.

I mentioned earlier that we now do remote production, so we're only shipping 20% of what we used to with regards to our broadcast facility. It's allowed us to reduce the headcount that travels and the amount of freight that gets sent around the place. And even on top of that, the lifetime of the hardware has become extended because it's not being shaken and rattled, or it doesn't get frozen on the plane and then sweat at 50 degrees Celsius on an airport runway for three hours. We found the longevity of the kit, which used to be about three years and then thrown in the bin, has now been considerably extended. I hadn't predicted this, but it's quite a nice fringe benefit.

As a technology leader, what have you learned from the pandemic that you can take forward into the future?

Flexibility has been one of the keywords of this whole pandemic. Being able to support 500 people from home, especially during the first lockdown when nobody could move anyway, was really challenging. But we did it.

We’re quite fortunate as an organisation in that we were ahead of the curve anyway. Because of the amount of people that travel with their job, 90% of the company works from laptops. So there wasn't a massive build. I was fortunate enough at the start; when things started to unfold in China, I thought, “Well, this looks like it might come our way,” and I managed to get ahead of the game as I ordered 100 laptop devices and started getting them spun up before the supply lines ran dry, which happens pretty quickly.

The key learning for me was to get ahead of the game and be as flexible as humanly possible because user requirements are many and varied. We were already on it with regards to VPNs, but having the right comms, the right equipment, and being able to spin those services up fairly quickly, were all key to our success.

smartCIO: the magazine for CIOs and IT leaders in EMEA