Chano Fernandez took on the role of co-CEO at Workday during a year marked by disruption and uncertainty. Read what he has to say about the importance of nurturing company culture, inspiring a brighter work day for all, and how Latin ballroom dancing influences his moves as a co-CEO.

After spending just a few minutes with Chano Fernandez, you learn that he is someone who believes a strong work ethic, a positive attitude, and leading from a foundation of empathy and compassion are the keys to success.

Chano’s career journey began with McKinsey & Company, where he served as a senior consultant. Shortly after, he became a founding partner of Blue C, an internet and IT services company. Next, he served in executive sales roles in Europe at Infor and SAP before joining Workday in 2014.

Today, he oversees the entire customer relationship at Workday, which spans acquisition, services, customer success, and customer support. Chano tackles his responsibilities with a palpable optimism and energy that inspires great work from his team and delivers results for Workday’s over 9,000 customers worldwide.

While Chano’s career has followed a linear path, a couple of unexpected twists and turns along the way influenced his approach to leadership—and this past year was no exception. He took on the role of co-CEO at Workday in August 2020 amid a global pandemic, widespread recognition of social injustice, and a polarizing political climate in the U.S. One could argue that 2020 was the ultimate test for business leaders, and Chano was committed to rising to the challenge alongside Workday’s co-founder, co-CEO, and chairman, Aneel Bhusri.

We caught up with Chano to learn more about the key areas he’s focused on, his observations as he marks his first year as Workday’s co-CEO, and what excites him most about the future of Workday.

You came into the co-CEO role during a challenging time in the world. How did you balance adjusting to your new role during a time of crisis?

As I look back on 2020, it truly was a masterclass for everyone in a leadership position. Soft skills, which are essential in business, became even more critical. Empathy and compassion were at the core of every swift decision, action, and communication Aneel and I drove.

Our purpose at Workday is to inspire a brighter work day for all—and that means helping our broader community adapt and thrive in this changing world. To do this, we rely on a set of core values—with employees No. 1 on the list. So, as I stepped into the role of co-CEO, I focused primarily on our employees’ safety and well-being around the world, so they could, in turn, help our customers and communities.

As I reflect on the steps we took at Workday, I’m incredibly proud of how we have supported employees and of the initiatives we launched to meet the moment, including providing employees with flexibility, financial, and well-being support and investing in several initiatives to support diversity, equity, and inclusion.

I’m also proud of how we continue to have our customers' backs to help them face the many challenges we’re experiencing throughout these rapidly changing times.

What is the secret to a successful co-CEO partnership, and can you share more about how you and Aneel distribute the responsibilities of the CEO role?

My wife, Esther, and I enjoy Latin ballroom dancing as a hobby. Now, what does this have to do with being a co-CEO? In ballroom dancing, a strong partnership is built upon a foundation of trust and commitment. When you and your dance partner have this foundation, it leads to a strong performance.

The same is true for a successful business partnership, and I’m proud to share that this is what Aneel and I have here at Workday. Beyond trust and commitment, we share a genuine friendship, which has been invaluable as we worked to take the proper steps for the business, employees, and customers—with support from our partners—during these uncertain times. Our friendship of trust is especially vital when we have to freestyle a bit.

“As I look back on 2020, it truly was a masterclass for everyone in a leadership position.” 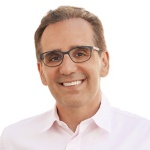 One of the keys to balancing our roles as co-CEOs is the steady rhythm we’ve found in conducting our day-to-day work. We each bring unique and complementary skills to the table, allowing us to decouple our focus to ensure we’re meeting the role’s demands while delivering positive results.

While I focus on customer relationships and growth strategy, Aneel focuses on product and technologies, which balances our key priorities nicely. That said, we don’t just rely on a divide-and-conquer approach. There are many responsibilities we share as co-CEOs. To me, they are some of the most critical responsibilities: accountability, communication, and living Workday’s core values. At the end of the day, we always strive to do right by our employees, customers, and the greater community.

What’s the best piece of leadership advice you’ve received in your career, and do you have any words of wisdom for folks who are looking to advance in their career journey?

I’ve been lucky enough to have received guidance and witnessed great leadership throughout my career, but ultimately it comes down to your attitude. I have always subscribed to Zig Ziglar’s notion that your attitude determines your altitude—and I’ve seen this with colleagues and customers alike. It may sound simple, but having a positive attitude and doing the right thing can be very powerful and can have an immediate impact on people.

This is what guides me as a leader and in my life, and it’s advice I’d pass along to anyone looking to advance in their career. So, when you arrive at the next level, focus on bringing the best you can offer to that role.

“One of the keys to balancing our roles as co-CEOs is the steady rhythm we’ve found in conducting our day-to-day work.”

I also think it’s important to surround yourself with people that will tell you what you need to hear, not just what you want to hear. Finding colleagues and peers who will be truthful will ensure that you will continue to grow and learn, no matter what level you’ve reached in your career. Ultimately, if you show up authentically, work hard, and demonstrate your willingness to become the best version of yourself, your success will follow.

If you could choose one person, past or present, to have dinner with, who would it be and why?

No doubt about it, I would like to have dinner with Rafa Nadal. I'm a tennis fan, and I'm Spanish. So, Rafa and I have that in common, but I admire him more for what he embodies. He keeps his composure and is very professional both on and off the tennis court.

Rafa is a highly skilled tennis player, but so are his competitors. Rafa stands out to me because he always shows up prepared and ready to work hard—he doesn’t just rely on natural talent or ability. He’s demonstrated that he is very persistent, mentally very strong, and humble, all traits that resonate with me. He seems like a good and kind human being, so I would welcome the chance to get to know him if given the opportunity.

What excites you most about the future at Workday?

While there are many things that excite me about Workday’s bright future, two stand out to me: our culture and our growth. When I joined Workday in 2014, I knew I was becoming a part of something special. This company is filled with incredibly talented, innovative, and genuine people, which is the bedrock for any great company culture. This culture we’ve cultivated continues to propel Workday’s business forward.

Our path to becoming a $4 billion company today has been a remarkable one. Now we have set our sights on an even more ambitious target—to become a $10 billion company. We’re well on our way with our solid performance in FY21 and 1H of FY22. We have a massive opportunity ahead to serve as the backbone of digital transformation for our customers. I’m thrilled to be helping drive our growth strategy as we create industry-leading solutions that help our customers run their businesses. As our business grows, so must our workforce, and earlier this year Aneel and I announced very ambitious hiring goals with plans to increase our workforce by more than 20% this fiscal year.

Building on the culture theme, can you share your thoughts on addressing company culture in an increasingly digital work environment?

While our company culture will continue to evolve as we grow the business and prepare for the “next normal,” our core values will remain foundational. We’re looking for new and creative ways to nurture our company culture in a hybrid work model to stay connected and engage with one another. Virtual meetings are great from a productivity perspective, but it’s easy to go straight to business and gloss over the beneficial small talk that happens during most in-person meetings. Those moments before the meeting allow us to get to know one another on a more personal level.

“This company is filled with incredibly talented, innovative, and genuine people, which is the bedrock for any great company culture.”

As we prepare for the future of work, we’re committed to providing employees with the flexibility they need to address their unique situations and making sure they are comfortable. We’re also prioritizing creating opportunities to experience the cultural connectedness our physical offices are designed for. At the end of the day, people are social creatures. So, as we continue to prioritize health and well-being, it’s vital that we create moments for people to get together, share stories, experiences, and ideas, in a safe and healthy environment.

Finally, do you have any moments that stand out to you as you reflect on your first year as co-CEO?

This past year has taught us all so much, and we’re emerging stronger and more resilient than ever before. There were so many touching moments I was able to witness between colleagues, employees, and our customers throughout the year that inspired me. During March and April last year, I called up a significant number of customers and employees just to check how they were personally doing and coping with everything and if there was anything we could do to help. I was personally impressed and touched to learn how much they were supporting each other, both customers and employees, and already sharing among them some of their early learnings of the pandemic and what was working well. When difficult moments come, we overcome them together.

The Workday community really came together when it mattered most and continues to support one another as we prepare for the future of work and business. This is why I’m filled with hope and continue to feel optimistic about the future of Workday.

Great talent is core to our success at Workday, which is why we’re rapidly hiring for new roles across North America, Europe, and Asia. Our Co-CEOs Aneel Bhusri and Chano Fernandez share more.

While Doug Robinson didn’t reach his childhood dream of playing in the NFL, he brings his strong teamwork ethic to leading our global sales team here at Workday.

Learn what Pete Schlampp, executive vice president of product development, has to say about why he left medical school and the huge opportunity for finance software.