How Business Leaders Can Pave a Path for Belonging and Inclusion

James Vaughn, vice president of community and language services at Workday, shares insights he’s gained throughout his career journey that help him model inclusion and connection from the top.

Commemorations are opportunities to reflect on our past. But they’re also moments to celebrate the ways we can shape our future.

Consider Juneteenth. On June 19, 1865, enslaved people of African descent in Galveston, Texas, learned from U.S. federal troops that they were freed under the Emancipation Proclamation, which had been signed by then U.S. President Abraham Lincoln roughly two and a half years earlier on January 1, 1863.

The newly freed slaves in Texas first celebrated the anniversary of emancipation in 1866, and the tradition began to spread across the country. Renewed interest in Juneteenth—the name is a combination of June and nineteenth—has increased over the past year alongside the rise in awareness of social and racial justice issues. Standing in solidarity with their respective communities, a growing number of state and local governments and companies, including Workday, have begun to observe Juneteenth as a paid holiday, and just today, the U.S. Senate passed a bill to make it a federal holiday.

“The recognition goes a long way to acknowledging the contribution and history of African Americans, as it signals an embrace of all people and diversity,” says James Vaughn, vice president of community and language services at Workday. Vaughn, who is Black, celebrates Juneteenth spending time with family, catching up with friends, and working on a community project.

Here’s more from Vaughn about how he has fostered the values of diversity at the leadership level and throughout his career journey:

On Facing Struggles in His Career Journey Related to Race:

“Like many underrepresented minorities, I have faced struggles. What's interesting though is sometimes you don't know you're facing those struggles. You may not know that you're swimming against the tide. You may execute well, you may have checked off the boxes needed to demonstrate that you're ready for the next stage in your career. But you still may not be considered ready for the next step. So, can I say I was conscious of every struggle? No, but I can tell you there were times I felt things were harder than they should have been.

“This was earlier in my career. Things have improved with the collective consciousness and awareness of implicit bias. It’s real. As a people leader, I am thankful for the commitment, training, and support that Workday provides in this area. It’s a journey, and we all are playing a part to improve.”

On Mentorship and Upward Mobility in a Corporate Setting:

“I came from a military family background. I had a chance to experience new cultures and make friends all over the world, but the military is a different type of career path. The upper mobility in rank was really a set path forward, as long as you were able to execute specified objectives. That's how I saw my father progress in his career, and so I grew up with a sense of, ‘Hey, those are the rules. If you follow the rules, if you execute, then comes the reward.’ That's not necessarily the case when you're in the private sector.

“Mentors helped me navigate this world of corporate America. Drawing advice from them, I figured out what I could do to round out my skill set, make the connections needed in order to advance my career, and become aware of my blind spots. One of the key elements of being a leader is the ability to step outside yourself and look at various situations from different angles. Mentors helped me mature as a person, which then enabled me to be a good people leader.

“I can't stress enough that if you don't have a mentor, try to find one. It doesn't have to be somebody in your organization or in your company. It could be somebody outside your industry. But a mentor needs to be somebody you trust, perhaps who has been there and done that, and can give you some objective advice. They can help you and offer a different perspective.”

“Mentors helped me mature as a person, which then enabled me to be a good people leader.” 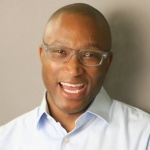 On Professional Organizations Focused on Diversity in Tech:

“I was looking for a community of Black professionals in technology and software because at the end of the day, I wanted to just make some friends, get to know people in other companies and other spaces, and find people who I can bounce ideas off of. A friend recommended /dev/color, a career accelerator organization geared toward Black software engineers, technologists, and executives. When I first attended a /dev/color conference, being in an auditorium filled with two to three hundred people who looked like me was a very rare moment in my career.

“And over the years by being involved with /dev/color, I’ve become friends with engineering leaders at some of the world's best technology companies, and we’ve shared ideas and discussed our challenges. We don't offer advice. We just offer stories—stories about things that we may have done that perhaps could be useful. We ask provocative questions to get each other to think about things differently. We play devil's advocate. It's a really great community.”

On Being at Workday:

“In my role as vice president, I lead the community and language service organization. My organization consists of three areas: tech publishing (InfoDev), which is responsible for delivering the wonderful documentation our customers rely on day in and day out. Second, localization, which supports Workday’s global growth by ensuring our product and supporting content is globally accessible and compliant, and third, the Workday Community, a platform that serves over 150,000 members.

“I apply the Workday leadership principles every day. I try to empower my leadership team and the organization through all of our values. If you're lucky enough to be a people leader here at Workday, you have access to these tools and resources to make yourself a better leader. During the 18 months I’ve been here, I've grown as a leader because of the experiences I've managed through. I’ll take these experiences and lessons with me in my career, as well as some of the best practices and examples of leadership that have been displayed from my leaders and across the organization.”

“Was I conscious of every struggle? No, but I can tell you there were times I felt things were harder than they should have been.”

On How Racial Justice Efforts in the U.S. Impact Diversity in Leadership:

“So it's been a tough past year. George Floyd, Ahmaud Arbery, Breonna Taylor. And more. I recognize the difference between me and those individuals is not much. I see myself in every one of those people who have been marginalized.

“From where I sit, a lot of the challenges in today's society stem from people not having examples of how to embrace each other as humans. And so the events of this past year made me more committed to making sure that whatever I do, I at least leave a trail that's well-trodden for the next person behind me who's coming along. As a leader, I must model the values that are important. When I'm working with my organizations and my teams, it’s important that we are conscious and inclusive. Because raising awareness is how you get better. And it’s a journey, not just a one and done.

“If you are someone who has trouble with that and isn’t interested in getting on a path toward being more inclusive and more accepting, then leadership isn't the place for you. I've had situations where as a leader, I've had to enforce that perspective and make sure I addressed behaviors that didn't match our values. As leaders, we're called to do that.”

On His Advice to Those Who Aspire to a Management or Leadership Role:

“You may be the only person who identifies as fill-in-the-blank for your team. And that may be the situation currently, but if you create an inclusive place and help to influence leadership to also see the need for diversity, you can attract more people to your organization—people who can help instill inclusiveness and lessen bias in the products and technologies that are being built and marketed.

“At times when I look around a place and see I’m the only one of my background, I think, ’Oh, boy. It's kind of lonely here.’ But I also think, ‘You know what? Why am I here?’ Yes, I may have to blaze that trail. Yes, I may have to be just one of the few. But that's OK. We have a duty as leaders, as individual technologists, to make sure that what we're doing in our craft, if you will, is leaving the world in a better place.”